Recently exciting news has been published of a thriving spotted tail quoll population in the Barren Grounds Reserve, right next door to Ben Ricketts! These beautiful, cat-sized predators are bouncing back thanks in part to a sustained campaign to control foxes on the mountain in the reserves and on surrounding properties, including BREP.

We are delighted to contribute to this effort, as the research team from the Department of Planning, Industry and Environment has stayed at Ben Ricketts as its base for the last five years.

This resurgence might be part of what seems to be a general improvement in wildlife numbers in our area. The kangaroo mob along Misty Lane has grown considerably in the last few years, and wombat numbers appear to be on the rise also. We are even seeing more echidnas!

Even more excitingly, since this story was published in June 2021 we have now seen a spotted-tailed quoll on Ben Ricketts itself, near the chicken shed. Our wildlife camera has picked up not only the quoll, but also all our 'regulars' - bandicoot, swamp wallaby, wombat, grey kangaroo, lyrebirds, wonga pigeon and more.

Read more about the quoll resurgence in the Illawarra Mercury or at the ABC. 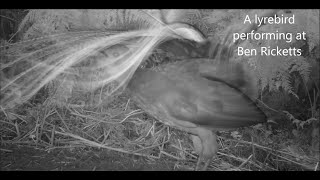 Winter is the best time to come to Ben Ricketts